Remember our project Youth e–Perspectives on Migration (YeP) and our training for young people called Find-Tell-Act (using digital media to tackle issues as the refugee crisis and migration)?

After the training in Croatia, where they learned a lot about the empowering side of digital media and the refugee crisis, Autumn 2016 was the time for our young participants to act! It was their turn to become agents of change and sensibilise their communities. How did they do that? Through the peer-to-peer events they themselves organised.

So, the date is 18th November, the time 19h. Simultaneously, in two different cities in Europe, Brussels and Barcelona, far from each other, but close in their mission, young YeP-ers gatherer families, friends, classmates and peers to show them their digital stories and talk about their questions related to migration.

The two events took different approaches, but had the same goal: speak our hearts and minds and show what we learned and created. Young people worked together as a team for many months on the organisation of these events, with the support of MAKS and El Teb.

Thirty young people came together to watch the eight great digital stories our participants created after the training, followed by a screening of the really impressive film TO KYMA – Rescue at Egeo Sea. This is the story of a group of lifeguards who traveled to the small Greek island of Lesbos to voluntarily and altruistically help refugees who arrive in Europe in deplorable conditions. 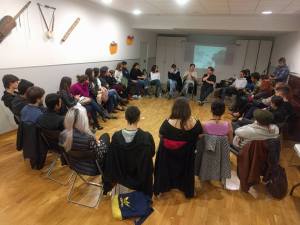 Participants had the chance to exchange with the director, David Fonseca, but also with representatives of Stop Mare Mortum, an organization raising awareness about the hazardous travel by sea. All agreed we have to make changes happen. And because young people can express their ideas in many different ways, including through music, a hip hop artist was there to put their thoughts in rhymes and rhythm.

The Belgian YeP group organized their peer-to-peer event in a youth center in Anderlecht, where a hundred people came to see their digital stories and discuss on the topic. The event was very well animated by the youngsters themselves, who had elaborated the script together with MAKS trainers. Each video story was followed by a debate on a specific question related to the topic of the story. Questions with no easy answers which have been haunting our participants: should unaccompanied migrant minors stay in institutional care if they prefer, or be forced to go to foster families? How can we recognize a marriage of convenience from a real one? Whose responsibility is the integration of migrants – community, government, school? The stories were emotional and personal, but at the same time with high artistic value and addressing issues of societal importance. The lively debate showed that the community needs more occasions like this to talk about the topic, share concerns but also benefit from the young people’s positive energy and quest for a happy end. The event concluded with a warm applause and an informal exchange.

The event took place in the Cultural Centre Prečko in the Trešnjevka area in Zagreb and gathered more than 200 people from the neighbourhood, representatives of different NGOs (Ludruga, Djeca prva) and young people. Our Croatian trainer Danijel, together with the Croatian YeP participants, led the event. It stared with photography exhibition and a screening of the film “On the other side of the mirror”. After that Danijel, with the help of the young participants, presented the project and our achievements. The presentation was followed by a screening of selected digital stories created by the young people during the project, and an open discussion with the audience. The evening ended with a more informal cultural programme with local music performa 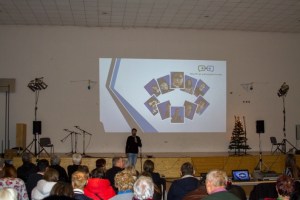 nces and chat among the audience. Everyone was impressed by the quality of the digital stories, that the young people managed to create in such a short time, as well as by the stories themselves. Most of all, please were impressed by the story of one of the Croatian participants, which they were eager to learn more about – a Somalian refugee, which happened to be in Zagreb during the summer and participated in our training. After the training he left Croatia and moved on to Germany, but he stayed in touch with the organisers and participants, and took part in the event through a live Skype connection.

Don’t forget the Final event of the project is approaching. It will take place in Brussels on 10th March, when we will present the training methodology to interested organisations from Belgium and Europe. Stay tuned for more details!